The World Map, referred to in-game as the Map of the Far, Far Range, is a feature introduced in Update 1.0.1 as part of The Navigation Update. At first, the map is blanked out and featureless save for The Ranch, but can be filled in by activating Map Data Nodes in respective zones.

To access the Map, the default button to bring up the map is M on the PC edition, Touchpad on the PS4 edition, and D-pad Right on the Xbox edition. When located in an area outside of any known zone, the map gains a static filter.

The Map can be zoomed in or out using the + and - buttons on the top right hand side, with the scroll wheel on the mouse on PC, or with the Left and Right Bumpers on a Controller.

The in-game map by default is blanked out and specific areas must be unlocked by activating Map Nodes. 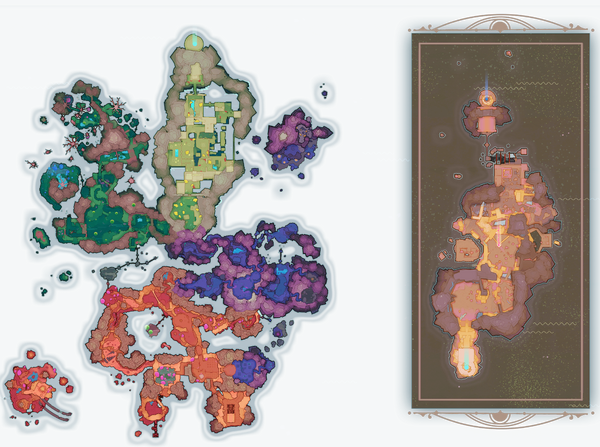 The map is also able to track various things for the player, which include:

Gordo icons are presented on the map when a Gordo Slime has been fed at least once. Both Wild Gordos and Snared Gordos can be tracked in this way.

Slime Keys are not tracked on the map. Instead the game tracks how many have been collected from wild Gordo Slimes in a particular zone on the top left corner, but only once the area's Map Data Node has been activated.

Extractors are presented on the map when an Extractor has been placed. The icon for the extractor corresponds to the type of extractor being used, and is always presented as a Novice extractor on the map regardless of the rank used.

Like Slime Keys, Treasure Pods are not tracked directly on the map; instead the game tracks how many have been opened in a particular zone on the top left corner, but only once the area's Map Data Node has been activated.

One way Static Teleporters are tracked on the map as a teleporter with a house icon. The destination - the inactive teleporter on The Ranch by the Plort Market - is not tracked.