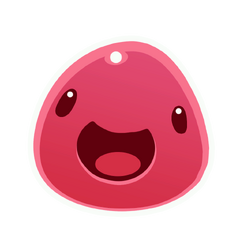 "Their coral hue is scientifically proven to be the color of cheer."

This is a proposal for a new style of slime infobox, one with a minimal amount of text. The example below is what the pink slime's will look like. The description underneath the slime picture should not have a line above it.

The diet and favorite food are placed on top of each other for the same reason as the plort and its price are: they both tell you information about roughly the same thing. The favorite toy and slime type have nothing to do with eachother however and are only placed as such to preserve space.

Favorite is abreviated to fav., also to save space. This is also the case with default beinf def., but I'm not to certain that is as clear an abreviation as the other.

Slimes that spawn only at a certain time of day or rarely, will have that indicated just above of the zone icons

Slimes that only spawn in one sub-section of a zone (puddle slimes on ring island) will have an * next to the zone the sub-section is part of with underneath the zone icons the information of which sub-section it is.

When a slime doesn't have a gordo counterpart in the wild, another datapoint should be used that only displayes Gordo. When a slime has no Gordo counterparts in the game at all. this should also be used and given the argument none. Because all wild gordos can also be caught on a gordo snare, just giving the slimes who have these counterparts Wild Gordo will be sufficient.

The Plort Recipes section is something that I would like to try out, but I'm unsure if it should be implemented

Retrieved from "https://slimerancher.fandom.com/wiki/User_blog:Kalkrona/Slime_infobox_redesign_proposal?oldid=32870"
Community content is available under CC-BY-SA unless otherwise noted.