For upcoming content announced to be added to the game, see: Upcoming Features

This page serves to document content that was either planned and ultimately scrapped, features that were once in the game but were later removed, or is in the files but remains unused in the current version of Slime Rancher.

An unused asteroid prop was once used in the prototype Beach, and the object data and mesh are fully intact within the game's files.

Slimes in the Beta version of Slime Rancher were much more simplified, differing only in their colorations. The Tarr also appeared significantly differently as it does now; sporting a crimson hue and a drooling mouth, which is referenced by modern Tarr on the Vacpack.[1]

These slimes are not present in the current games, though it is likely that they were adapted into other existing slimes, which were made to have easily identifiable silhouettes rather than a simple color difference.

Early concept for what appears to be a Largo Slime 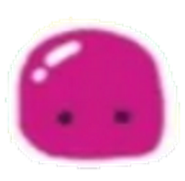 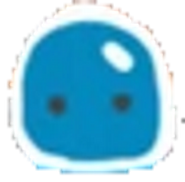 There are a number of unreleased Chime instruments in the game's code. Low Slime Singing is the only one to have no sound files associated with it.

Low Slime Singing does not have any audio files.

Wallpapers are an unused, purely visual element of corrals. They've been present in the game since 0.2.0, but are never enabled. There is a single wallpaper in the game's files, which appears very squished in-game due to it being in the wrong resolution.

When active, a wallpaper wobbles and distorts, while cycling around a corral's various barriers.

While crouching would not lower the camera to indicate it was active, it would physically reduce the size of the player's collision box while slowing down overall movement, and shaking the vacpack up and down while moving. While pressed, it would disable jumping or jetpacking as long as the crouch button was held, however if one were to be in the middle of jetpacking whilst crouching was active, would cause the player to glide forwards, likely unintended behavior.

It is unknown why it was removed, or what function it was intended to have.

Crouching enabling the player to go through the Chicken Cloner, normally not possible

Gliding by jetpacking with crouching enabled

An unused textureless cube model is present in the game's files, and has been since Update 0.2.0.

The Loading Screen Texts indicate that Viktor was attempting to make Cube Slimes, which may have been the cube model's intended use.

The Debug Menu was used by the Monomi Park developers to easily test the game. It was disabled after Update 0.2.2.

The Hydro Shower is a gadget that was originally planned to be included in Update 0.4.0, where it would have been unlocked a week after the Hydro Turret. It is unknown why it was never finished, but is fully functional. The prototype model is a blue sphere on top of a cuboid, somewhat resembling a matchstick.

Like other utilities it requires two minutes to install it. Unlike the Hydro Turret and Super Hydro Turret, it has to be activated manually. Once active, a rain effect will cover the immediate area while the gadget pulses every 0.5 seconds. Every Tarr within the radius of roughly 3 rad auras will take 20% of the damage of a regular Water shot, requiring at most 5 pulses, or 10 pulses at night to dispatch them. After 10 pulses the rain effect will stop, and has a minute cooldown before it can be used again

The crafting recipe of the gadget is:

Iron Rancher Mode was a game mode intended to be introduced in Update 1.4.0, and was intended to add challenge to standard gameplay. It was shelved in favor of content Nick felt was more exciting and more in line with Slime Rancher.[2]

All of the features can still be found within the game's code. Their exact functions are detailed here.

The Meteor Slime was once planned to be added in Update 0.6.0, but were scrapped because the slime wasn't working, Monomi Park thought that it wouldn't make sense on the ranch and Mosaic Slimes were already raining fire, so parts of its behaviors were repurposed for other slimes.

The only remaining part of it in the game is the magnetism code, which has been present since the slime's prototype stages.

Modifiers are special options which change the rules of the game. They have been in the game since the prototype stages and were planned to be used in Iron Rancher mode. There are 6 modifiers available:

The Fashion Pod item is unobtainable through legitimate means, and spawning in the item through modding reveals that it has no icon, its vacpack color is set to black, and its overworld icon is an "Image Needed" placeholder. However, the pod is fully functional and equips the fashion pod to slimes like normal pods.

An old screen welcoming the player to the third pre-alpha of the game was present in the game's files up until Version 0.3.5. The screen showed many differences from newer versions of the game, such as a lighter-pink X button, and the default Unity scrollbar. The screen read:

You're playing Slime Rancher Pre-Alpha Ver 3. As the plucky Beatrix LeBeau, you have set out for a life on the Far, Far Range to stake your claim in the exciting world of slime ranching.

You'll earn cash by ranching slimes, feeding them and collecting plorts. Cash those plorts in at the Plort Market and use that cash to upgrade your ranch into a plort-making powerhouse!

Thanks for helping us test Slime Rancher!

Although the screen itself was removed in Version 0.3.5, the text assets were kept in the game's files up until Version 0.4.1.

The Puddle Gordo has an identifiable entry within the games files, but has no model or game object associated with it.

The Saber Slime has a pure Saber Slime model, which was added in Update 1.4.0; prior to this it had no model.

The pure Saber Slime does not spawn naturally and cannot be vacced but otherwise fully functions like a normal slime, including having the ability to transform into a largo slime and having its own Secret Style Pack.

The Pollen Cloud Cutoff is a static variable found within the code of the game. it is found with the other variables that would affect the Tangle Slime's ability to produce pollen, and is set to a value of 0.95, or 95%. the variable though is unused, and as such has no effect on pollen production. it likely was scrapped for simplicity, and likely would have been used to tell the tangle slime when to stop producing pollen.

Quantum Vibration levels are variables generated within a method of the code within the Quantum Slime, which while the method seems complex, it isn't called for any events outside of determining the vibration level. It is located within the class known as QuantumVibration, which is used to determine if the slime can teleport.

As the code is unused, it may be leftover from the original Quantum Slimes before being simplified.[3]

There are many unused Tier 2 Utilities hidden within the files such as the Rapid Med Station, the Super Hydro Shower, and the Elite Taming Bell. They have been present in the game's files since Update 0.4.0 and of all of them, only the Super Hydro Turret has been added.

The Hydro Shower is the only unreleased gadget to be fully functional; all others do not have any functional data associated with them.

The Tier 4 Treasure Cracker is an upgrade that has been in the game since Update 0.4.0. It does not have an entry in the Upgrades shop, which means it can only be obtained by modifying the game.

It currently has no function as there are no Treasure Pods requiring its use.

There were originally planned to be 30 Chroma Packs available from the 7Zee Rewards Club. However only 27 (including console exclusive Emerald and Sapphire) are used, leaving three of them unused - a copy of the Ruby Chroma Pack, Amethyst and another one that has no data assigned to it. The copied Ruby and Amethyst Chroma Packs are set to unlock once Rank 9999 of the 7Zee Rewards Club is reached, rendering them unobtainable. Those Chroma Packs can be applied to the ranch like the regular ones. The Kanpeki and Tomatillo Chroma Packs use separate ID numbers.

There are actually two defined Fashion Pod Slots; one for the front and one for the top of the slime. Currently, all fashion pods use the Front slot, leaving the Top slot unused.

Weather, or more specifically Rain, was a feature once planned to be in the game. It was used in the prototype versions of the game but since public release, it has remained unused, but can be re-enabled in the game files.

When enabled, rain has a chance to appear every 3-12 hours and is entirely cosmetic, so it does not damage Tarr. It can also rain just as frequently in The Glass Desert.

Before Ponds were changed to provide unlimited water and no longer required allowing it to autofill over time, their Slimepedia entry once stated that rain would immediately refill them. However this was never implemented.