View source
watch 01:36
The Trickiest Treasure Pods: Tips & Tricks
Do you like this video?
Play Sound

Treasure Pods are spherical objects found dotted around the Far, Far Range. Each one will reward Beatrix with a unique blueprint for Slime Science gadgets, a Decoration, 3 Slime Science Resources, or - more rarely - 3 Golden Plorts. They are usually found in out of the way spots and can be only opened once per game.

To open Treasure Pods, you must obtain Treasure Crackers from the Vacpack upgrade terminal.
There are three tiers, each opening more advanced Pods:

The Treasure Cracker MKI allows you to open Green Pods; it will become available once The Lab is unlocked and your first gadget has been crafted. It costs 4,500

The Treasure Cracker MKII allows you to open Blue Pods and will become available after the MKI Upgrade is purchased and a total of 20 Gadgets have been crafted in The Lab. It costs 9,000

The Treasure Cracker MKIII allows you to open Purple Pods and becomes available after the MKII Upgrade is purchased and a total of 50 Gadgets have been crafted in The Lab. It costs 25,000

It is not necessary to use the gadgets you create to unlock the Treasure Crackers.

This map contains all of the Treasure Pod locations in a single image.
(Except Ogden's Retreat, The Wilds, Nimble Valley, and The Slimeulation due to the lack of a map)
Note that while these locations are precise, they may be on different elevations. 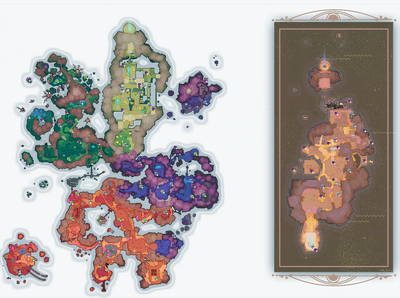