Slime Rancher Wiki
Register
Don't have an account?
Sign In
Advertisement
in: Pages with map locations, The Vaults, Sublocations,
and 2 more 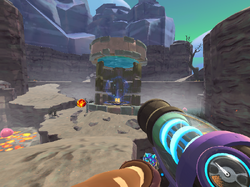 The Ash Isle Vault is a vault located in The Indigo Quarry's Ash Isle area. Like the other vaults, it is unlocked only after having triggered the credits.

A Slime Key is required to access this vault as there is a Slime Gate inside. There are Treasure Pods inside which are all Purple quality, therefore the Treasure Cracker MKIII is also required to open them. 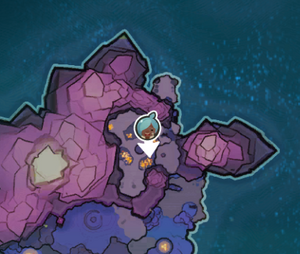 After opening the Slime Gate, the player is presented with a room with a single purple treasure pod on a raised platform, which when opened drops a single Gold plort. The room is seemingly devoid of anything else, the area only otherwise being surrounded by slime sea water and the only option being to turn back.

Behind the platform however is a switch which raises the wall at the back, revealing the true extent of the vault; a giant, water-filled room full of purple treasure pods.

Behind the fake wall

Ash Isle Vault before being activated.

The pods behind the fake wall.

The one-way teleport back to The Ranch