Slime Rancher Wiki
Register
Don't have an account?
Sign In
Advertisement
in: Incomplete articles, Exclusive to The Slimeulation, Zones,
and 3 more

12
*13 with the Secret Style Pack installed.

The Slimeulation is an area associated with Viktor Humphries which was released in Update 1.4.0. The activity is accessed through Viktor's Workshop.

The Slimeulation is an in-development, virtual re-creation of the Far, Far Range created by Viktor Humphries. The goal of the Slimeulation is to predict slime behaviors and evolution, but unfortunately it is riddled with bugs in the codebase which have produced a curious anomally[sic] known as glitch slimes.

Viktor is now seeking a partner to enter the Slimeulation, wrangle glitch slimes out of hiding, and file valuable bug reports.

Note: None of these resources can be taken out of The Slimeulation. Slimes that appear have a chance to be a glitch slime variant, and can spawn as a largo. Gold Slimes and Lucky Slimes will always be a Glitch Slime.

Glitch Slimes are converted to Bug Reports when logging out.

The objective of the Slimeulation is to collect Glitch Slimes, which will convert to Bug Reports on exiting the Slimeulation through any of the available exits that open up when enough time has passed.

The Slimeulation is a mish-mash of the original areas from The Dry Reef, The Indigo Quarry, and The Moss Blanket released prior to Update 0.3.5, with a very unfinished and untextured virtualised twist. Each area spawns slimes native to that area much like in the overworld, and areas that were later added to Slime Rancher, such as Crystal Volcano, are nonexistent in the Slimeulation, and the entrances are covered with unfinished blocky textures.

Despite the presence of Food within the Slimeulation, the slimes within do not eat and therefore do not produce Plorts, so no largo transformations - although largos will spawn naturally - or tarr outbreaks occur. Slimes will also always be Elated, and are not subject to Hunger and Agitation, but can and will experience Fear.

Any slimes or resources vacced up will have their Slimepedia entries unlocked, if they were not unlocked already; this includes the Lucky Slime and the Gold Slime. 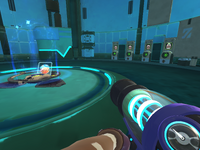 The Slimeulation is accessed through the large terminal within Viktor's Workshop which requires a clean inventory; there are four storage receptacles to the left of the entrance teleporter with which to deposit items. Note that Slimes cannot be stored, so must be left to roam the area.

When logging into the Slimeulation, you are transported to an entrance point in any of the zones, and music is an 8-bit variant of the equivalent song in the overworld. At this point, you are free to explore the area as you see fit, and there is no time limit.

Debug Spray is a finite resource which is obtained from green resource nodes found throughout the Slimeulation. It is used to pull Glitch Slimes from their disguises and can be used to combat against Digitarr. 15 units are given at a time, is stored in the water tank and replaces water if any remains within the tank, and caps at 30 units regardless of storage upgrades.

Debug Spray will not respawn when collected until leaving the Slimeulation, and it is required to expose out-of-place objects.

Glitch Slimes never appear initially in their true forms, instead they are disguised as slimes or objects within the world. When revealed, Glitch Slimes will flee in all directions and despawn soon after if left out too long, but have a chance to replicate itself when it despawns.

The amount of glitch slimes that spawn from a disguised slime depends on what was revealed:

Glitch slimes may also be disguised as objects within the world, which appear in spots where they don't normally exist in the overworld. Examples include fruit trees with perpetually ripe fruit that cannot be harvested, or growing the wrong fruit entirely. Objects can only be exposed as glitch slimes with Debug Spray. Out-of-place objects contain 12 glitch slimes, but they will disappear if not sprayed with Debug Spray.

After approximately four in-game hours within the Slimeulation, corrupted rifts will start to appear, the UI will indicate that the exit portal is now active, and beacons will appear in specific spots to point the way to the portal.

On Adventure Mode, these rifts spawn Tarr-like entities, also referred to as Digitarr, and behave almost identically to their standard counterparts, including sharing their weakness to water. Unlike standard tarr however, they have a chance to produce two tarr when they despawn naturally; this does not occur if dispatched with water or Debug Spray. When they bite you, they can force between 3-4 glitch slimes out of the vacpack, which will then flee in all directions. Digitarr will always only require one splash of water or debug spray to dispatch. The rifts continue to become more numerous over the course of two in-game hours[citation needed], and will cease spreading further.

Note that when the rifts appear, there is no time limit to leave.

Digitarr are not spawned on Casual Mode.

Due to being a simulation, a knock out will not trigger the standard time-skip. Instead, you are spawned back within Viktor's Workshop with a clean inventory.

Upon leaving through the exit portal, all resources are discarded and any Glitch Slimes get converted to Bug Reports, which can then be traded to Viktor.

There is no cooldown for re-entering the Slimeulation, and can be re-visited immediately with all of the Debug Spray nodes refreshed and tarr rifts cleared.

The Slimeulation has Treasure Pods which contains new gadgets and Slimeulation-themed decorations.