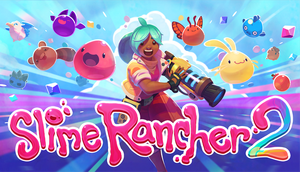 Slime Rancher 2 is an indie open-world first-person life simulation video game developed and published by Monomi Park. The game is a direct sequel to Slime Rancher and features Beatrix LeBeau exploring the new Rainbow Island. The game is planned to release for early access in 2022 on Xbox Series X|S and Windows 10 through the Microsoft Store, Steam, and Epic Game Store.

Continue the adventures of Beatrix LeBeau as she journeys to Rainbow Island, a mysterious land brimming with ancient technology, unknown natural resources, and an avalanche of wiggling, jiggling, new slimes to discover, like the bouncy cotton slime or the aquatic angler slime.

As Beatrix attempts to unravel the island’s secrets and uncover its true purpose, she’ll build, ranch, and farm within a beautiful conservatory, whose sparkling glass walls give her full view of the prismatic paradise she now calls home.

New/Returning Slimes, Food, and Parts of the Ranch

Parts of the Ranch

These slimes have been physically seen in trailers, or their plorts have been seen listed in screenshots including a Plort Market. This list may be subject to change.

All of the new locations on Rainbow Island we know of so far.

Coralled Honey Cotton and Tabby Largos, a Angler-Pink Largo, a largo between Batty and Ringtail Slimes, a cuberry tree and a pair of flutter slimes in the corner.

Image containing Cotton Slimes, as well as a Lucky Slime, and some Rock and Tabby slimes.

Honey slimes, a Flutter Largo and a Quantum Largo in a warm colored area.

Angler Slimes, with one about to eat a hen.

Flutter Slimes, with a Plort Market in the back.

Zoomed up image of the Plort Market

Close up of a group of Cotton Slimes

A Strange Fruit/Veggie/Beehive hanging on a mushroom.

An ancient ruins like area with a bluish hue. A smiling tabby slime is shown in the image as well.
Community content is available under CC-BY-SA unless otherwise noted.
Advertisement