Slime Rancher Wiki
Register
Don't have an account?
Sign In
Advertisement
in: Veggies, Food, Exclusive to The Glass Desert,
and 7 more

The Silver Parsnip is a veggie that is found exclusively in The Glass Desert.

They are relatively rare until certain oases are restored; notable locations to find a Silver Parsnip patch include the tunnel leading to a Dervish Plort statue, by the Cocoa Slime Lamp Treasure Pod, and in the Hobson End Temple in the far north of the Glass Desert, near Hobson's final note. Once its nearby oasis has been restored, a patch spawns behind the Tangle Gordo building. They can also be found in crates in The Glass Desert.

About:
Despite their slightly metallic aftertaste, these shimmering root veggies are considered a delicacy by gourmands across the galaxy. On the Far, Far Range, ranchers often eat them during the holidays, to bring good fortune in the coming year.

Silver Parsnips growing in a Garden.

Some Silver Parsnips growing near an Oasis in The Glass Desert. 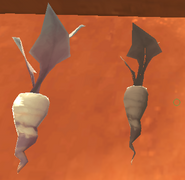 A normal and a rotten Silver Parsnip, side by side.

The Silver Parsnip's name and the mention of gourmands in the Slimepedia entry may be a loose reference to the "Silver Palete" series of cookbooks, written by Julee Rosso and Shiela Lukins between 1979 and 1995. The mention of ranchers eating Silver Parsnips during the holidays to bring fortune for the coming year may be a reference to the Chinese New Year; a 15-day festival where tradition and fortune plays a heavy role. Physically it is a parsnip with a clean silver finish, giving it the appearance of having been treated with food color spray, similar to the Gilded Ginger.