The player is introduced to this mechanic at noon on Day 2 when Thora West first contacts them via Starmail, and a further four additional NPCs will then get in contact on subsequent days. It is not necessary to complete a trade with them, but it is necessary to open the Range Exchange at least once to introduce the next one.

Food, plorts, and slimes exclusive to The Moss Blanket, The Indigo Quarry, The Ancient Ruins, or The Glass Desert will not be requested if their respective zones have not had a Slime Gate opened to access them.

Upon completing a Range Exchange trade, a crate is dropped and then broken containing the rewards presented on the Range Exchange screen. Crates may contain random food and/or plorts, but will always offer lump sums of Newbucks in units of 250

Food and plorts exclusive to The Moss Blanket, The Indigo Quarry, The Ancient Ruins, or The Glass Desert will not be given as rewards if their respective zones have not had a Slime Gate opened to access them. 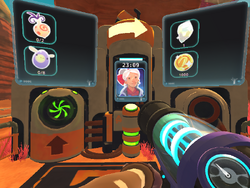