Slime Rancher Wiki
Register
Don't have an account?
Sign In
Advertisement
in: Exclusive to The Glass Desert, Fruit, Food,
and 7 more

The Prickle Pear is a fruit found exclusively in The Glass Desert. It can be grown in a Garden Plot in The Ranch.

About:
Prickle pears are as tough as the Glass Desert itself; having a thick, leathery, skin and covered in sharp barbs, they're an 'acquired taste' to be sure. But those who put forth the cautious effort will find one of the sweetest fruits in the known universe hiding within.

On the Ranch:
Deposit a prickle pear into a garden's depositor and you'll grow a large prickle pear tree of your very own. 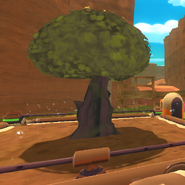 A Prickle Pear tree being grown in a Garden.

A couple of Prickle Pear trees in The Glass Desert after having an Oasis restored.

A hanging Prickle Pear tree in The Glass Desert.

A normal and a rotten Prickle Pear, side by side.

Prickle Pears are a visual pun on the Prickly Pear cactus. Physically, they resemble purple pears, with spines reminiscent of the kiwano fruit.