The Piratey Fashion Pod is an Xbox-exclusive player-created Curio gadget crafted using the fabricator at The Lab. It is part of the Piratey Playset DLC.

as soon as The Lab is purchased. However, it is only available on the Xbox One and Xbox Game Pass editions of Slime Rancher.

The Piratey Fashion Pod is used to apply almost all slimes - with the exception of The Tarr - with hook and cutlass. With the Fashion Pod equipped, slimes will treat the Treasure Chest as a favorite toy.

When the gadget is placed, a node is created that the player can use to vac fashion pods from as items, the pod items can then be used on slimes. If the pods hit any surface other than a slime, they simply dissappear. Slimes can unintentionally apply themselves with pods by wandering through the node.

Fashion Pods can be replaced with other fashion pods, or removed completely by using the Fashion Pod Remover. 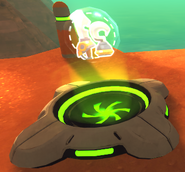 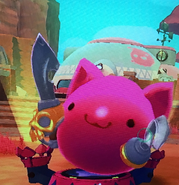 The Piratey Fashion Pod may draw some inspiration from Sea of Thieves, an action-adventure game on Xbox One and PC. The hook's design resembles the game's Hook vanity item, and the skull design on the guard of the cutlass heavily resembles the skulls which are collected in the game, in particular the Villainous Bounty Skull.