The Phase Lemon is a fruit found in The Ancient Ruins and Viktor's Workshop.

Phase Lemons can be found on incorporeal trees found throughout the ruins which appear in specific spots which change on a regular basis, and a singular static tree can be found in Viktor's Workshop after unlocking it for personal use. Phase Lemons can be tricky to get since the trees require fruit shot at them to phase them into reality, but can only do so when ripe and will disappear instead of pop off once ripened. Alternatively, they can be found in crates found in The Ancient Ruins.

When grown in a garden, the tree is physical and the lemons can be harvested like any other crop.

About:
A phase lemon comes from a different place and time. They are like an echo, reverberating through the halls of the Ancient Ruins, never staying in the same place for long.

In order to harvest phase lemons a rancher must pass fruit matter through the phase lemon tree when lemons are present. This process somehow removes the fruit from our reality and phases in a lemon in exchange.

On the Ranch:
Deposit a phase lemon into a garden's depositor and you'll grow a large phase lemon tree of your very own. 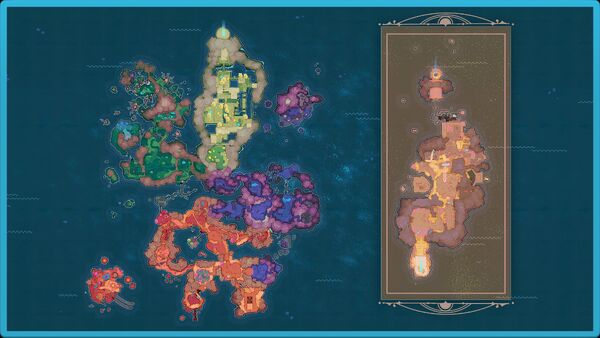 The Phase Lemon's name and behavior of requiring fruit to be shot at incorporeal trees to solidify them references phase transitioning; the act of turning a state of matter - solids, liquids, gases, and plasma - into another. It may also be a reference to author and Professor Emeritus Don S. Lemons, who studies primarily in plasma physics. The Phase Lemon's Slimepedia entry refers to the concept of time travel and parallel universes. The Phase Lemon itself physically resembles a lemon, in particular the common supermarket Eureka variety which can be produced all year round.

Retrieved from "https://slimerancher.fandom.com/wiki/Phase_Lemon?oldid=91378"
Community content is available under CC-BY-SA unless otherwise noted.