Slime Rancher Wiki
Register
Don't have an account?
Sign In
Advertisement
in: Exclusive to The Indigo Quarry, Veggies, Food,
and 8 more

The Odd Onion is a veggie found exclusively in The Indigo Quarry.

Odd Onions have the same harvest yield in a garden as Carrots and Pogofruit; a majority of the crops will be carrots with a guaranteed net gain of 4 Odd Onions, while each remaining vegetable has a 1/5 chance of being an Odd Onion.

On the Ranch:
Deposit an Odd Onion into a garden's depositor and strangely, carrots will begin to grow. However, there is a good chance you'll get some odd onions in your crop as well.

There is no dedicated Odd Onion patch. Instead Odd Onions have a chance to grow in Carrot, Heart Beet and Oca Oca patches in The Indigo Quarry.

Odd Onions growing in a garden along with Carrots. 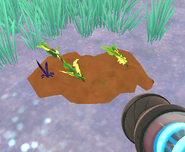 An Odd Onion growing with Carrots in The Indigo Quarry. 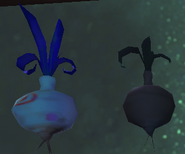 A normal Odd Onion and a rotten Odd Onion, side by side.

The concept of the Odd Onion may be based on the slang term in literature meaning "not often", which is referenced in the Slimepedia Entry - "Forage into the Indigo Quarry and you'll always find the Odd Onion in your haul." - and demonstrated by its behaviour of occasionally growing with Carrots. Due to Odd Onions being present with other crops in the wild, they may suitably fit the role of weeds; this classification is reversed when Odd Onions are grown domestically to the Carrots that grow with them. Physically, it is a large onion with the coloration and swirl design reminiscent of Billy the Puppet, in particular his face, from the Saw franchise.