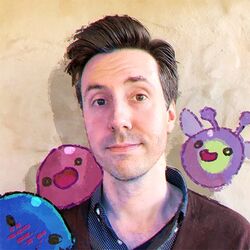 Nick was the lead developer of Spiral Knights for seven years. He left the Three Rings development team in 2014[1] to co-found Monomi Park with fellow developer, Mike Thomas.[2]

In March 2017, Nick held a talk at GDC - an indie games summit - to talk about emergent storytelling in Slime Rancher. He covers Slime behaviours and the benefits of breadcrumb storytelling, among other topics relating to the game.[3]

In 2017, Nick was nominated for the Breakthrough Award at the Golden Joystick Awards.

Nick's avatar depicting the Impostocube on the Spiral Knights forums. 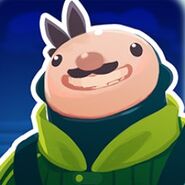 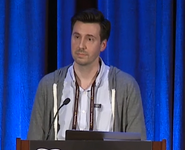 Nick at GDC in 2017
Add a photo to this gallery

Retrieved from "https://slimerancher.fandom.com/wiki/Nick_Popovich?oldid=82872"
Community content is available under CC-BY-SA unless otherwise noted.