Lucky Slimes are rare Slimes that have a low chance of appearing in specific locations around the Far, Far Range.

It is one of four feline-based Slimes in the game, along with the Tabby Slime, Hunter Slime and the Saber Slime.

Slimeology:
Lucky slimes are a strange variant of tabby slimes that seem to have a fascination with shiny objects, particularly newbuck coins. A lucky slime gobbles up any coin it can find, giving it a distinct jingling sound as it moves about.

However, coins don't make for a balanced diet and a lucky slime will still greedily devour meat of any kind. In doing so, its body bursts with a shower of newbucks, leaving little room left in its slimy tummy. This burst often sends the lucky slime flying into the air.

Upon detecting a rancher, the lucky slime will soon make a hasty retreat. No known rancher has been skilled enough, or perhaps lucky enough, to capture one of these slippery slimes.

Rancher Risks:
Lucky slimes pose the same risk to ranchers as other rare slimes: mainly, accidents in pursuit which can lead to demise. The promise of a small fortune when encountering a lucky slime has led to more than a few ranchers head-first into the slime sea.

This occurrence has led some of the more superstitious ranchers to see the lucky slime as a bad omen, or the universe testing their greed. These ranchers will ignore lucky slimes altogether, even purposefully shooing them away. Well, until you hear those newbucks jingling, and then, maybe just one shot wouldn't hurt...

Plortonomics:
A lucky slime isn't known to produce plorts of any kind. Leading slime scientists believe this to be the result of the lucky slime not being a true slime variant. Rather, lucky slimes are believed to be just an abnormal tabby slime: one whose color has faded as a result of ingesting so many coins. It is perhaps this very change that also led to ceasing plort production.

Lucky Slimes make a distinctive jingling sound when nearby, and have a low chance of appearing in specific spots around the world. A Lucky Slime on the ground (not airborne) can detect the player in its field of view from 25 units away. In the event this happens, it will become completely stationary and will despawn after a few seconds. It is still capable of eating meat while stationary.

If the Lucky Slime has not noticed the player, it will attempt to seek out any nearby meat on its own volition if any is nearby, otherwise, it will hop around aimlessly and stack with other slimes. If it becomes airborne while seeking out chickens, it is capable of jumping in midair to get to its target. Regardless of whether or not it has noticed the player when it's eaten meat, it will become stationary and despawn soon afterward.

When it eats meat it will shoot into the air with a coin particle effect following it, and automatically award multiple singular instances of 50

The Lucky Slime cannot be stored in the Vacpack and cannot be consumed by Tarr. It is not affected by Agitation, so can remain indefinitely on the Slime Stage. It can be applied with Fashion Pods and responds to Slime Toys.

These are the possible spawn points for the Lucky Slime. Note that it spawns rarely, so is not guaranteed to appear from any of these locations on a given day. 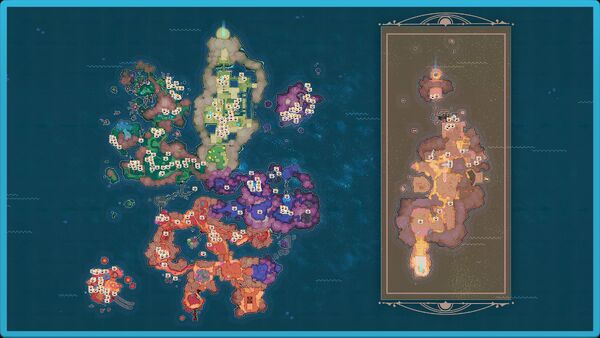 Lucky Slimes draw heavy design inspiration from the Pokémon Meowth, which is based on the maneki-neko; the lucky cat or beckoning cat, a Japanese figurine which is kept as a good luck charm and displayed in restaurants and shops to bring customers fortune and good luck. They are often depicted holding a Koban, which the newbuck coin on the Lucky Slime's head is a reference to. Its ability to drop newbucks when fed meat may be a reference to Meowth's signature attack Pay Day.

The Lucky Slime's Secret Style - Guardian - with its red collar, gold bell and green underbelly, more closely resembles a maneki-neko figurine. Its black coloration in particular is based on a black maneki-neko which is said to ward off evil, which may account for the name "guardian".