Largo Slimes are the result of a pure slime eating a plort not of its type. They are far bigger than pure slimes and can no longer be stored in the vacpack in this state; instead only being able to fit onto the nozzle. A Largo cannot revert back to a pure Slime.

A Largo Slime adopts the favored food, traits, and abilities of the Slime it was before transforming and the Slime type of the Plort that it ate as a pure Slime. When fed, they produce two Plorts; one for each of its base Slime types. This is doubled to four - two each - when eating one of its favored foods, making them far more efficient for ranching.

There is a risk to ranching Largos however; if a Largo eats another Plort of a type that it does not produce, it transforms into a Tarr; a hostile Slime that devours other Slimes and produces more Tarr when it does so. This is often referred to as a "Tarr outbreak".

It is not possible to create Puddle, Fire, Quicksilver, Lucky, Gold, Twinkle or Glitch Largos.

Slimeology:
Largo Slimes are a hybrid of two slimes resulting from a slime eating a plort unlike its own. They are twice as big normal slimes and have a combined diet of their two source slimes, making them enticing for ranchers that want to maximize their profits.

However, a largo is too big to vac and can only be transported using the end of the vac nozzle. This makes them difficult to control if things get out of hand.

Rancher Risks:
In addition to largos being more difficult to manage and having the combined powers of two slimes, an even greater threat to ranchers lies within these super-sized slimes. If a largo eats a plort unlike its two source slimes, it will transform into a ravenous tarr slime!

Ranchers need to be very careful when dealing with largos or risk an outbreak of tarr that can quickly overtake their entire ranch. Always carry a full tank of water just in case!

Plortonomics:
When a largo eats, it produces plorts of both source slime types, making them potentially very lucrative for ranchers that can deal with the added risk of keeping them.

This chart shows all the Largos that are currently available in the game.
Note: The saber slime only exists in largo form. 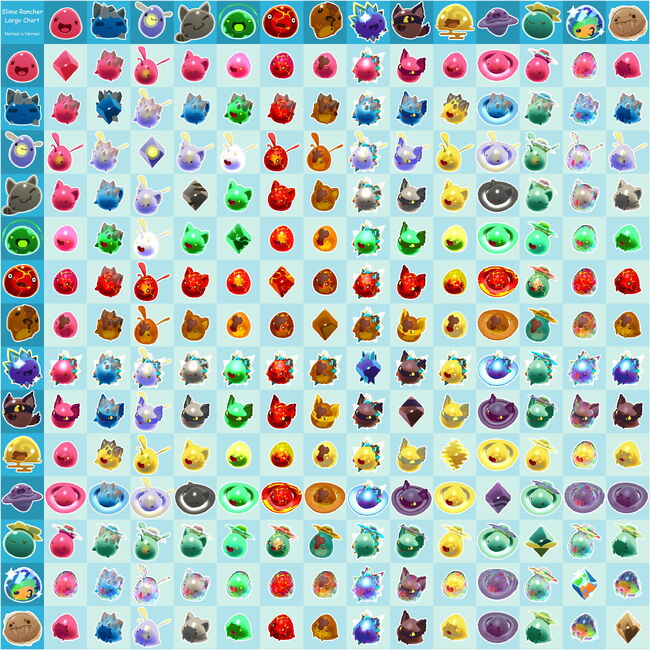 When there are many of one type of slime and just one of another type of slime, it is possible to mix them using only the food that the latter slime type eats (e.g. Veggies for a Rock Slime among several Dervish Slimes). Refer to the table for more info:


Feral Slimes are Largos that are particularly grumpy and will try to take a bite out of Beatrix if she gets too close. But maybe if they're given a bite to eat...

The Secret Style Pack is a paid cosmetic DLC which switches pure and largo slimes between their classic and secret style appearances.