Gold Slimes are a rare species of slime that produce the most valuable plorts found on the Far, Far Range.

Slimeology:
The most exclusive and sought after of all slime species is easily the gold slime. Very little is known about these slippery creatures as they have proven impossible to capture. Gold slimes are quick as a flash and will immediately begin to flee ranchers on sight. If a rancher is to profit from an encounter with a gold slime, they need to think quick.

Rancher Risks:
Gold slimes produce no direct risks to a rancher but their appearance often induces panic and leads to (sometimes fatal) mistakes. Further, the only way to obtain gold plorts is to strike a gold slime with any spare resources in your vac. Doing so can produce a gold plort, though it also leaves a trail of additional resources in the area, leading to unintended largos, or worse.

Plortonomics:
Gold plorts have little practical use and are the most valuable of all plorts simply because they are shiny and rare. Back on Earth, the elite love to adorn themselves in jewelry made of gold plorts, far exceeding the value of any terrestrial precious metal. For this reason a rancher should never pass up the chance to get a gold plort or two from a rare chance encounter with a gold slime.

Gold Slimes produce a sparkle sound effect when nearby, and have a low chance of appearing in specific spots around the world. A gold slime also has a chance of appearing when opening a crate, albeit with a very low chance. A Gold Slime on the ground (not airborne) can detect the player in its field of view from 25 units away. In the event this happens, it will emit a faint "Aah!" and flee from the player, where it will despawn after a few seconds whether on the ground or in mid-air, however constraining it in the vac stream will prevent it from despawning for the duration it is ensnared. It cannot be stored in the Vacpack.

If the Gold Slime has not noticed the player it will hop around aimlessly and can stack with other slimes. When a Gold Slime collides with any food item (except Gilded Ginger), chickadoos, or any Plorts other than Gold Plorts, it will produce a plort - or three plorts with Golden Sureshot; this can happen regardless of player intervention. If it has produced plorts in this manner it will begin to flee and despawn soon afterward whether or not it has noticed the player. If a Gold Slime is hit in the face with a resource, it will despawn instantly. If a Gold Slime eats a Gilded Ginger, it will produce 5 plorts regardless of Golden Sureshot, will not flee if it has not noticed the player, and colliding with a Ginger does not cause it to produce additional plorts. A freshly-fed Gold Slime will be fully satiated, and will not immediately eat another Ginger. Note that a fleeing Gold Slime can despawn while in the process of feeding and producing plorts.

Gold Slimes cannot be consumed by Tarr. They can be placed on a Slime Stage and will not despawn as long as they remain on it, however, they can break off when agitated. Gold Slimes can also be applied with Fashion Pods, and respond to Slime Toys.

These are possible spawn points for the Gold Slime. Note that it spawns rarely, so is not guaranteed to appear from any of these locations on a given day. 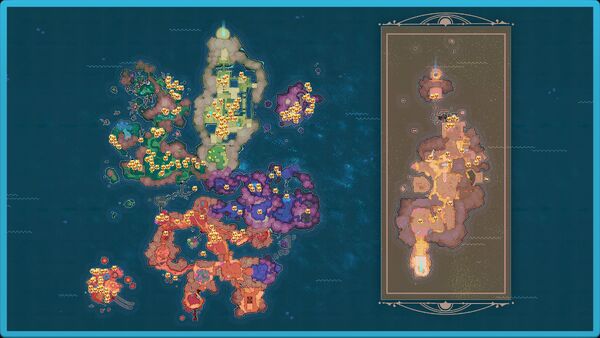 The Gold Slime is based on Gold, a rare precious metal which has been utilized throughout history for its rarity and luster. The Gold Slime's inability to become a Largo Slime, cause largo transformations, and being consumed by Tarr - which are based on oil and tar - may all be based on gold's very low reactivity to other elements. Due to its nature as a slime, it resembles liquid gold, and its teardrop shape may be based on the Soul Jelly, a rare monster from Spiral Knights.