Slime Rancher Wiki
Register
Don't have an account?
Sign In
Advertisement
in: Veggies, Food, Exclusive to The Glass Desert,
and 10 more

View source
watch 00:48
What is Gilded Ginger?
Do you like this video?
Play Sound

When found in the ground:

The Gilded Ginger is an elusive Veggie that is found exclusively in The Glass Desert, though only two will appear a day. When in the ground, it will produce a glimmering sound which makes it easier to detect. It is the favored food of Gold Slimes and can be used on a Gordo Snare to attract a Gold Gordo, which cannot otherwise be encountered in Adventure Mode.

The Gilded Ginger, as well as the Kookadoba fruit and Spicy Tofu, are unique among Food items in that they cannot be grown in a garden.

About:
Curiously, gilded ginger cannot be replicated in a garden as its unusual biological properties prohibit it. However, there is perhaps another use for it...

On the Ranch:
Said to be the holy grail of veggies, gilded ginger can very rarely be found growing in the Glass Desert. It is the only known food that a gold slime will eat, and the few that have seen it claim that doing so will greatly reward the lucky rancher. 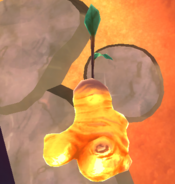 A Gilded Ginger in the ground, animated.

Vaccing up a Gilded Ginger in one of its determined locations.

A Gilded Ginger despawns at 5am.

A normal and a rotten Gilded Ginger, side by side.

Gilded Gingers cannot be grown in a Garden

Prior to 1.3.2b, gingers uprooted themselves at 5am.

The Gilded Ginger's name may be a reference to the Ginger Gold apple variety, which are generally yellow in coloration. It may draw some inspiration from edible gold leaf, which is often used as a garnish in luxury culinary uses, which may account for the ginger's rarity. Physically, it is a ginger plant and root with a clean gold finish, giving it the appearence of having been treated with food color spray, similarly to the Silver Parsnip.