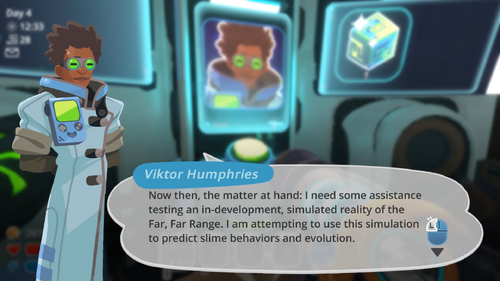 This update is jam-packed with cutting-edge ranch tech including: Advanced Drones to help with daily chores, a (questionably useful) Chicken Cloner, and a whole collection of wacky gadgets designed by Viktor himself! There’s also a new zone, new ranch expansion, and a new slime!

Viktor’s Slimeulation:
Viktor has been working on a virtual re-creation of the Far, Far Range and it’s full of bugs. Well, glitches. Well… glitch slimes to be exact.

Glitch Slimes:
Glitch slimes are hiding everywhere inside Viktor's Slimeulation and it's up to you to help him capture, quarantine, and research them before they spread! Be extra careful while exploring: taking damage from the corruption could give those tricky glitch slimes a chance to wiggle out of your tank!

Glitch slimes will turn into bug reports after you leave the Slimeulation. Turn in your collection of bug reports for unique rewards and mysterious manifold cubes you can use to craft new gadgets.

New Gadgets!
It wouldn't be a very science-y update without a ton of new slime science gadgets! Help Viktor wrangle glitch slimes and he’ll reward you with a smattering of useful gadgets he’s been developing!

Advanced Drones
These new-and-improved drones can handle not one, but TWO programs! Talk about advanced! Set a primary AND a secondary task to keep these busy bees busy while you’re busy being breezy.

Portable Water Tap
Water taps are a small, placeable water source that can be used to refill your tank if there aren’t ponds nearby.

Chicken Cloner
This is an experimental gadget constructed by one of Viktor’s scientific peers and, when it works, it creates a perfect clone of any chicken. When it doesn’t, well, that’s a data point at least!

Slime Bait
Fruit, Veggie, and Meat Slime Bait can be placed around your ranch or out in the Far, Far Range to attract slimes who favor that type of food.

Portable Scareslime
Place this on your ranch to keep slimes away from things they shouldn’t be around or… :slimescared:

Dash Pad
Ready, set, RUN! Use the Dash Pad to instantly refill your energy levels so you never need to slow down!!!

The Decorizer
This new storage device allows you to store, clean up, and manage decorative ranch items (ornaments, echoes, etc.) with the press of a button! Deck out your ranch and then clean it all up in a snap.

The Decorizer can be unlocked via the 7Zee Rewards Club as a mid-tier reward (it will already be available for ranchers who have unlocked or surpassed Silver Storm I).

We are also excited to announce that the Secret Style Pack is now available for purchase! It’s an all-new downloadable content pack for Slime Rancher! 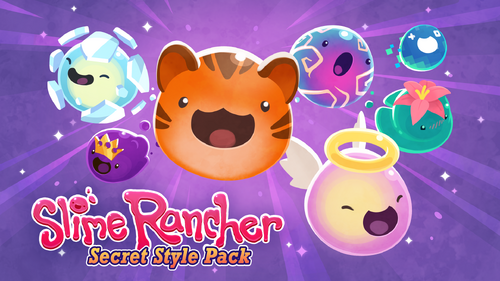 Search for special treasure pods throughout the Far, Far Range and discover each slime's unique secret style. Once discovered, you will be able to re-style every slime of that type whenever you choose!

This new DLC pack adds 20 slime styles for you to find and unlock!

Note: Secret styles do not affect gordos as the gordos in the world, and their appearances, are an important part of game progression and we didn’t want to make it confusing to new players. This may change in a future update after further evaluation.

Let us know what you think about Viktor’s Experimental Update and the Secret Style Pack on Twitter! Until next time, stay wiggly and happy ranching! :D