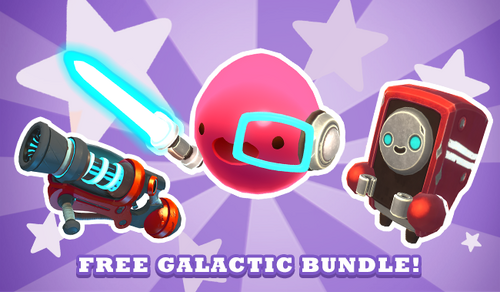 The Galactic Playset will let you dress your slime up as an intergalactic hero off to save the planet with their trusty Beeper Bot. We're also adding special, platform-exclusive Ruby Chroma Pack which you can use to give your ranch house, vacpack, and ranch tech a shiny, new paint job!

Beeper bots are best for booping

Wiggly Wonderland 2018:
Last year’s Wiggly Wonderland was a blast and we can’t wait to share with you what we have planned for this year. Part of 1.3.2 prepares the game for the incoming holiday event and we will do separate update once we get a little bit closer! :slimeamazed:

We think this year is going to be a lot of fun and we’d appreciate it if you would keep any surprises you find a secret until you see the official reveal. No one wants to get a blog of tarr in their stocking, do they?

Stay tuned for a full announcement later this month!

(PC Only) Message of the Day:
You may notice a new pop-up message on the main menu of the game. This new feature is a way for us to keep you up to date on all sorts of things. For example, we will send you messages when we release a new update, if there’s big news about Slime Rancher, or when new plushies have been added to our merch catalog!

Our goal with this is to keep you in the loop when there’s cool new things happening! It’s quite surprising, but apparently not everyone uses Twitter. But if you want to make sure you never miss a beat, we recommend following us on your preferred social channel (links below) and subscribing to our monthly Newsletter.