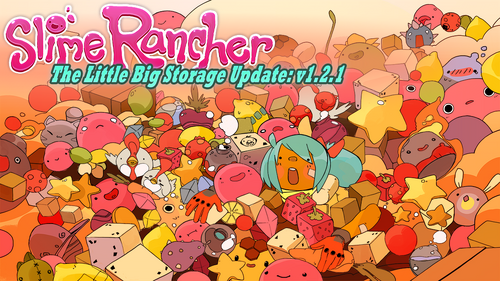 The Little Big Storage Update is now available on PC and Xbox is scheduled to be out later this week!

The Storage Situation:
Do you have hundreds of echoes hovering in a corner somewhere? Maybe a few thousand Wiggly Wonderland ornaments stashed in The Grotto? The Little Big Storage Update is here to help! Ranch storage is getting a huge upgrade and it’s just in time for a little spring cleaning.

That’s right, we’re giving you 12 slots with the ability to hold 300 items each. You do the math!

Retrieved from "https://slimerancher.fandom.com/wiki/Game_Versions/Version_1.2.1?oldid=90124"
Community content is available under CC-BY-SA unless otherwise noted.