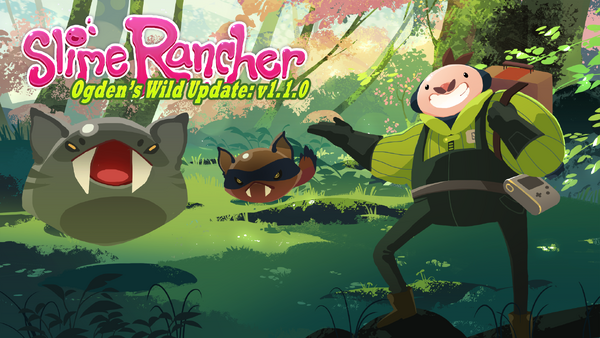 The Wilds:
The Wilds are a new zone that’s home to a horde of feral saber slime largos. You can access The Wilds after receiving an invitation from Ogden Ortiz to visit his retreat at the edge of The Wilds. Ogden will then hire you to acquire delicious kookadoba fruits from The Wilds and reward you for doing so.

Casual Mode:
A new game mode has been added for players that want to use Slime Rancher to truly relax. Casual Mode is a wholly separate game mode that mirrors Adventure Mode, save for the complete lack of tarr slimes, and reduced feral slime aggressiveness. In Casual Mode, largo slimes cannot eat a second plort, and feral slimes will not perform their patented feral slime butt stomp.

Please note that given the lack of tarr, some achievements may not be obtainable in Casual Mode.

A bugfix patch was issued today to address a few smaller issues, as well as to begin address a larger, standing issue.

While this patch will not fix a save file that is currently unusable, it should mitigate future occurrences of the issue, so we decided to push this update now. We hope to have a solution for the unusable save files issues as soon as a fix is available. Thank you for your patience.

A bugfix patch was issued today to attempt to further fix the bugs related to teleporter crashes, and other similar actions. Please give us feedback if this patch helps you!

v1.1.0d is now live and should resolve all teleporter bug crashes. Please mail support@monomipark.com if you are running v1.1.0d and still getting crashes when using teleporters.

Retrieved from "https://slimerancher.fandom.com/wiki/Game_Versions/Version_1.1.0?oldid=90116"
Community content is available under CC-BY-SA unless otherwise noted.