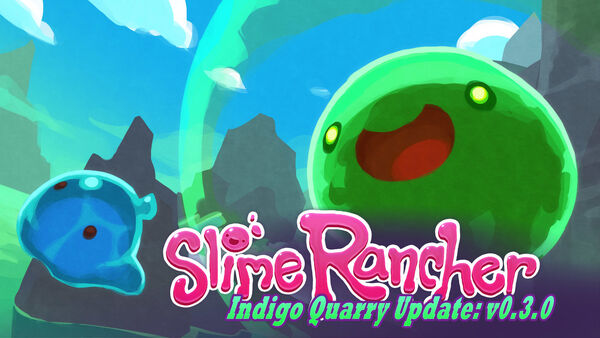 Slime Rancher v0.3.0, aka The Indigo Quarry Update, has arrived! With it comes a bunch of new content, some rebalancing, graphical upgrades, and many bug fixes.

So let’s dig into all of that stuff now:

Save Compatibility
Though we recommend starting a fresh save for the best possible experience, we have ensured that pre-version 0.3.0 saves would be compatible with version 0.3.0. However, as we’ve stated before, this won’t necessarily be the case in other future updates. There may come a time when significant changes need to be made that would make compatibility impossible.

Please note: it is entirely possible that older saves will load players stuck inside new geometry, such as a mountain. This can be a strange, disorienting experience. Should that be the case, simply use the Emergency Return in the options menu.

Edit: If you continue to experience save game issues on Mac, please consult this post to migrate your save games: http://forums.monomipark.com/viewtopic.php?f=5&t=2466

New Zone: The Indigo Quarry
A new, explorable zone has been added: the Indigo Quarry. The Indigo Quarry is a winding network of caves and cliffs, striated with deep purple hues from the rare minerals found within it. It was once the site of a mining project but went bust after the discovery that the rare ores it produces quickly break down in atmospheres other than that of the Far, Far Range.

The quarry increases the range’s explorable space by about 50%. Future updates will expand it some and connect it to future areas in order to create a more cohesive world.

New Slime: Rad Slimes
Rad slimes can be wrangled from the Indigo Quarry. Though rad plorts are quite valuable, ranchers need to be careful to avoid rad sickness when dealing with rad slimes. When a rancher gets inside a rad slime’s rad aura, a rad exposure meter will begin to fill. Once filled, further exposure to rad auras will damage the rancher. Simply being away from rad auras for a short while will remove rad exposure.

New Slime: Lucky Slimes
A new rare slime has been added, the elusive lucky slime. Lucky slimes are a strange variant of tabby slimes that seem to have a fascination with shiny objects, particularly newbuck coins. A lucky slime gobbles up any coin it can find, giving it a distinct jingling sound as they move about.

If a rancher is fortunate enough to find a lucky slime, they’ll need to be clever enough to figure out how to get at the newbucks inside a lucky slime’s bulging belly. If you’re stumped, just ask BOb.

New Veggie: Oca Oca
A staple of cooking on the range, the hearty oca oca is a naturally salty, soft spud. As the key ingredient to the always tasty 'rancher's hashbrowns' they have likely been the fuel for a great deal of slime wrangling since their discovery on the range. Look for oca oca in the quarry.

New Game Mode: Five Day Rush
A new game mode has been added, the 5-Day Rush (the standard experience is now ‘Adventure’) where ranchers try to collect as many newbucks as possible over the course of 5 days. This new game mode can be considered a test of sorts. If the community responds positively to it, other modes will be considered and the 5-Day Rush could even be expanded. We welcome your feedback.

The rules and new features of the 5-Day Rush are as follows:

Puddle Slime Changes
Puddle slimes have received a graphical overhaul and are now much more puddle-y. Puddle slimes are naturally very shy and this is now reflected in their behaviors. If a puddle slime is in close proximity to more than 3 other slimes, puddle or otherwise, they will not produce plorts. Puddle slimes also realize that they greatly resemble frisbees when shot from a vacpack. You can do what you will with that information.

Edit: A couple of additional bugfixes were added immediately following this release that include:

That about wraps it up! We hope you enjoy v0.3.0 and appreciate your sharing this journey with us as we continue to develop Slime Rancher into the best game possible!

A followup patch has been issued to address a few bugs we discovered shortly after releasing v0.3.0

Retrieved from "https://slimerancher.fandom.com/wiki/Game_Versions/Version_0.3.0?oldid=90075"
Community content is available under CC-BY-SA unless otherwise noted.