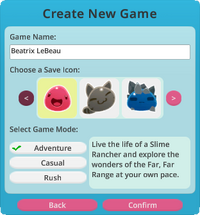 There are currently three Game Modes in which to play Slime Rancher, which is selectable when making a new game file.

Once selected, the game file cannot be changed under normal circumstances; to switch Game Modes you will need to create an entirely new file.

The Slime Rancher Demo is a free version of the game that was released with Update 1.0.0, and currently remains on Update 1.3.1b. It has all the features of the standard game up until Update 1.3.1 including endgame content, but the gameplay is limited to 60 real-time minutes and any saved games cannot be accessed once created until the full game is purchased.

Adventure Mode is the standard game mode that has full access to the game. Adventure Mode makes up a majority of the game's story, mostly presented through Hobson notes, NPC interactions, Loading Screen Texts, and Starmail.

Adventure Mode can be "beaten" by triggering the end credits sequence. The player will not lose their progress upon doing so and can continue playing the game for as long as desired afterward. To trigger the credits sequence, the final Hobson Note in the large temple building in the northernmost area of The Glass Desert must be read, and the final Starmail from Casey titled Another tour must be read; a minimum of five slime gates be opened for this to occur and all of Casey's Starmails must be opened. Post-credits, Hobson will get in contact via Starmail which unlocks The Vaults.

Casual Mode is a modified version of Adventure Mode where The Tarr does not appear in any form, due to Largo Slimes no longer eating plorts to induce the transformation into a Tarr in this mode. Feral Slimes are also less aggressive, and will not perform their Area of Effect buttstomp.

Because Tarr do not spawn in Casual Mode, Tarr related Achievements cannot be achieved in this mode, and its Slimepedia entry is already unlocked.

The two Tarr related Achievements are:

Rush Mode is a special game mode where the player has three days - which can be extended to five through Range Exchange trades - to earn as many Newbucks as possible, using any means at their disposal.

It is the successor to Five Day Rush.

VR Playground is free DLC content available on Steam. Unlike the other modes, it is not selected on the New Game screen, but is instead ran as a launch option through Steam with an Oculus or VIVE. It features maps based on locations from the main game.