Fear is an emotion Slimes can experience which causes them to flee from whatever is scaring them.

Slimes experiencing fear are able to jump higher than normal, and any Slimes stacking with one another while experiencing fear will break their stacks. Fear wears off naturally as long as nothing prolongs it, and is unaffected by Hunger or Agitation.

There are multiple sources which can cause slimes to experience fear.

Tarr are the most common source of fear for slimes, appearing frequently in the wild in areas where slimes often cross-contaminate. Coralled slimes jumping while experiencing fear during a Tarr outbreak are capable of breaking their corral's Air Net, if one is installed.

The Digitarr and their rifts that appear in The Slimeulation are both capable of inflicting fear on slimes.

A Pink Slime gets spooked by a digitarr rift in the Slimeulation.

A group of Pink Slimes experiencing fear around Digitarr.

A Pink Slime experiencing fear around Digitarr as it gets consumed.

A Garden's Scareslime is capable of inflicting fear on slimes that wander near the plot. While a slime is still able to eat food from the plot, they will try to steer clear of the garden.

Much like the Scareslime, the Portable Scareslime is capable of inflicting fear on slimes that wander too close, keeping a wide berth from the gadget. Its intended purpose is to keep slimes away from certain areas.

The Fire Pillars which erupt from the ground in The Glass Desert during a Solar Anomaly can inflict fear on both pure Slimes and Largo Slimes. In addition, contact with the pillar will cause a sharp agitation spike. 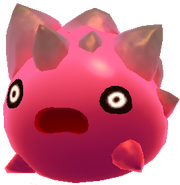 The standard fear face for most slimes prior to their graphical update in Update 1.4.0