Beatrix LeBeau is the name of the Rancher that players control during the course of the game. Beatrix is the new owner of The Ranch, which was previously owned and left into disrepair by Hobson.

While not much is known about Beatrix's personal life prior to becoming a rancher, it is made clear through starmail that she has a special someone back on Earth named Casey, who, throughout the course of the game, reveals parts of their history together.

It is mentioned that Beatrix once owned a shop, which is where Casey adopted their cactus from. The context of the starmail suggests that the shop had been closed for some time.

Two starmails, "A death hike" and "New Year's Eve" suggests Beatrix has an outdoorsy personality. In "A death hike", they mention she was "serious about the whole outdoors thing" and was "decked out in a pack and gear" and after 5 miles into the hike she wasn't out of breath; suggesting she also has a fit physique to go with it.

In "New Year's Eve", they mention she talked to them about one of her trips to Africa, which is gone into some more detail in "Re: Africa".

All of Beatrix's abilities are granted to her by her vacpack. She is capable of storing up to four seperate items in her vacpack and shooting them out at will. She has the ability to sprint for short bursts which consumes the vacpack's energy reserves. She also has access to a flashlight, a radar pointing directly to the Ranch House - or the entrance teleporter if in The Glass Desert - and she has access to a map of her surroundings.

The vacpack can be upgraded to include a jetpack so she can fly for short periods of time, as well as a water tank so she can fight back more effectively against Tarr. The vacpack can also be upgraded to provide more Health, Energy, storage capacity, and have Energy efficiency upgrades for both the jetpack and sprinting. Later on in the game, Treasure Crackers can also be purchased to open Treasure Pods.

Beatrix in the end credits. 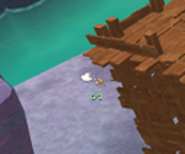 The Beatrix widget used in the editor.

This is the first image where Beatrix can be fully seen. 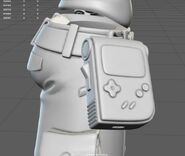 In-progress Beatrix model showcasing a Gameboy-like pouch on the side. 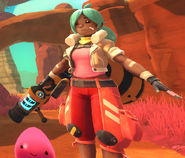